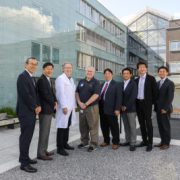 On 27 June 2016, a delegation from the Jikei Gakuen School Corporation and Sangyo Gijutsu Gakuen School Corporation (JIKEI Group), Japan, visited the Swiss Concussion Center and the Schulthess Clinic. JIKEI Group comprises more than 70 colleges in Japan (including approximately 35,000 students), including the Tokyo College of Medical Sport, with whom Dr. Mario Bizzini, Head of Physiotherapy at the Swiss Concussion Center, has been cooperating for several years. 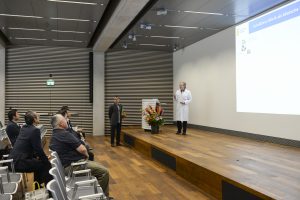 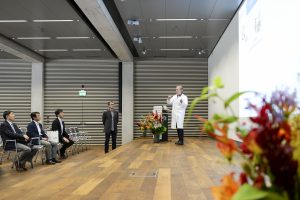 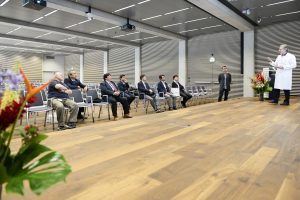 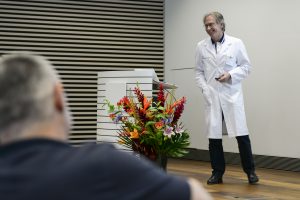 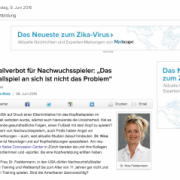 The leading international online platform for medical topics, “Medscape“, interviewed Nina Feddermann, Head of the Swiss Concussion Center, in the run-up to the European Football Championship in France 2016 on the subject of the ban on header bans for young players. The full interview is below. The original post is under this link (free registration necessary).

Kopfballverbot für Nachwuchsspieler: Header ban for youngsters: “The header itself is not the problem”
Author: Teresa Nauber |08. June 2016

Since headers in youth football were banned in the USA after pressure from a parent’s initiative, the uncertainty is growing here as well. Do headers have serious health consequences? Not only parents of young players, but professionals are also afraid of long-term effects – also because is this also suggested by current studies. Dr. Nina Feddermann is a neurologist specializing in head injuries. At the newly founded Swiss Concussion Center in Zurich, she and her colleagues advise athletes who have suffered a head injury.

Medscape: Dr. Feddermann, in the USA, young footballers are not allowed to head the ball during training nor in matches until the age of 11, and until 13 only during training. Are Americans overbearing?

Dr. Feddermann: To be honest, I do not know exactly how this decision came about. The American Soccer Federation has probably responded to a collective complaint by parents. From a neurological point of view, however, there is currently no scientific evidence for this. To date, it has not been proven that header per se has any negative effects on the brain’s structures or functions. The results of studies with active and former footballers are contradictory. The studies dealing specifically with football in childhood have concluded that concussions are rare in childhood. The main cause of the few concussions was not the header itself, but direct body contact or falls.

Medscape: What exactly are the pathophysiological mechanisms behind concussions?

Dr. Feddermann: A concussions is a mild form of traumatic brain injury (mTBI). The exact pathomechanism has not yet been detected. According to a common hypothesis, a so-called “neurometabolic cascade” is triggered by the trauma. This begins with an ionic disturbance, which increases the extracellular potassium. The result is a nonspecific electrical depolarization of the cells. Additionally, glutamate is released and the potassium-dependent effects increase. In affected patients, for example, loss of consciousness, memory gaps (amnesia), and cognitive impairments can be observed. The energy requirements of the affected cells increase, glycolysis and lactate production increase, and the oxidative metabolism is restricted. Basically, a vicious circle arises from various effects which are mutually dependent and lead to what is termed a cellular “energy crisis”. For example, cell-membrane damage and an increased permeability of the blood-brain barrier can occur. Overall, the brain is more vulnerable for about a week than usual.

Medscape: Does something like this happen also during a header?

Dr. Feddermann: No, in my opinion this is one of the challenges: One has to distinguish between what is called “concussions” in German, i.e. the mTBI, whose probable effects on the brain I have just explained and the sports-associated concussion. In English, this is called “concussion” and is understood as a mild subtype of mTBI. It is caused by direct or indirect trauma against the head (acceleration-deceleration mechanism or “coup” and “contre-coup” injury). It is usually a functional disorder and not a structural injury. Correspondingly, the standard imaging indicates normal results.

The “concussion” is characterized by a diffuse, mostly reversible brain damage, which can lead to neurological and neurocognitive changes occurring rapidly after the event, such as dizziness, headache, blurred vision, and concentration problems which can occur with or without a loss of consciousness. The core features of the classical mTBI (amnesia, confusion, and equilibrium disorders) are not so frequently observed in sports-associated concussions.

Additionally, you have to distinguish between this mild form of concussion, and what happens with a header. The terms ”header” and “(sport-associated) concussions” are unfortunately often mixed together. The force effect on the head during a header is usually much lower than in the trauma mechanism of a concussion. Therefore, these beats are also referred to as “subconcussive”, that is, low. Whether cumulative effects of repetitive low-intensity force effects on the brain have a negative effect on brain structures or function has not yet been determined. However, Vann Jones of the Institute for Aging and Health at Newcastle University in Great Britain has shown, for example, in a small study in 2014 that the risk of neurocognitive impairment after the end of the football career is as high as any other person.

Medscape: So headers are not dangerous at all?

Dr. Feddermann: A header is a technical skill that is learned. There is no evidence that this technique leads to lasting injuries – if it is learned and applied in a controlled manner. Headers are suspected of being a risk factor, but the main causes of head injuries in footballers are not header.

Dr. Feddermann: Direct body contact with an opponent or falling. There is a very recent prospective epidemiological multi-centre study on head injuries in children aged 7 to 12 years in organised football. There were 39 head injuries and a neck injury recorded in 688,045 game hours. Of these, 11 were diagnosed as concussions, and 2 of them were caused by ball contact – so one in 344,022.5 game hours. Most children had been injured by direct physical contact or, in other studies, by hitting their heads on the pitch.

Medscape: There are already studies, however, which suggest that the constant headers can have profound consequences. For example, Dr. Inga Koerte and colleagues from Munich and Harvard showed changes in the brain structure in former professionals, which were related to the exposure of the players to headers.

Dr. Feddermann: Yes, the studies have – unfortunately, in my opinion – led to much uncertainty. The problem is that results of studies are disseminated whose design is not at all appropriate to substantiate causality. In one of the studies by Dr. Koerte you mentioned, only 12 soccer players were examined. In another, the players themselves estimated retrospectively over a year how many headers they had played. We have also carried out studies with professional players. Many of them had problems remembering how many games they played last season. In addition, studies are based on newer imaging methods, such as diffusion-weighted magnetic resonance tomography (DW-MRI). Currently, it is not yet clear whether an abnormality seen in the actual state is later to be assigned to a disease value or whether it recurs. However, studies into this topic should be continued in any case.

Medscape: So, you would not be in favour of a header ban in football?

Dr. Feddermann: I do not think this is the right path for two reasons: first, we do not know enough about the effects of repetitive headers. To this end, we gave a lecture at the DFB (German Football Association) Scientific Congress in January, for which we screened 991 abstracts, and analysed the relevant studies. Here, at the Swiss Concussion Center, we have concluded that prospective combined longitudinal and cross-sectional studies are necessary to draw clear conclusions. Secondly, we wonder whether age is the right indicator for such a ban. Children develop very differently. Everyone who has ever seen football with children already notes body size.

Medscape: Does it even make sense to only enforce such a ban in childhood?

Dr. Feddermann: It is undisputed that the child’s brain is more vulnerable to injuries because it is still developing. In addition, the neck muscles are less developed and the header technique less mature. The latter in my view speaks against a ban in youth football.

Headers are an elementary part of football; you cannot simply abolish it. Eventually, footballers should be introduced to the header, preferably playfully, controlled and above all with balls adapted in size and weight. This is best done in childhood. Evidence shows that the number of synapses increases only until about age 10, after which what is not needed is reduced again. That is, you can learn certain things only to a certain age.

Medscape: So, head injuries in football are in your opinion no problem?

Dr. Feddermann: Head injuries should be paid particular attention, since in rare cases it is a potentially significant injury. Here at the Swiss Concussion Center, we look after athletes daily, including footballers, after head injuries. In football, however, these injuries are usually not caused by headers, but because, for example, two players collide during tackling.

Medscape: So does something have to be changed on the field?

Dr. Feddermann: From my point of view, one should try to reduce direct body contact on the field so that football can evolve from a physical to a more technical game. The referees must also be trained for this. In the prevention of injury, this approach has long been a common practice. Analyse what the main risk factor for an injury is and then consider whether it can be minimised. Before the 2006 FIFA World Cup, a study conducted by FIFA’s Center for Medical Evaluation and Research identified the direct elbow strike against the head as the main cause of head injury. Thereupon a new rule was laid down, after which a direct elbow strike is punished with dismissal.

Medscape: Before such rule changes enter into force – what can team physicians, coaches and supervisors do if a player shows signs of a sports-associated concussion or one of its subforms?

Dr. Feddermann: It is essential to make a correct diagnosis as early as possible, since these are often combined injuries and different diagnoses result in different therapeutic measures. An initial rest period is recommended after a concussion. If the balance system is affected, however, rapid physical activity is required, or specific therapeutic measures, to initiate central compensatory mechanisms. If the player is deprived of such measures, this can lead to long-lasting problems and it can have long-term sequences. Ten days of dizziness are a risk factor for the development of affective disorders such as anxiety or depression. To identify players with an increased risk for a prolonged course at an early stage, it is important for medical colleagues who care for players or teams should consult a specialist at an early stage. As a Center, we are happy to advise players, team physicians and coach teams.

© 2016 WebMD, LLC
The opinion stated is that of the author and does not necessarily reflect the views of WebMD or Medscape

Source: Header ban for youth players: “The header itself is not the problem”. Medscape. 8 June 2016.