The members of the team at the Swiss Concussion Center are carefully selected specialists with many years of experience in their relevant fields and a close relationship to elite sports. 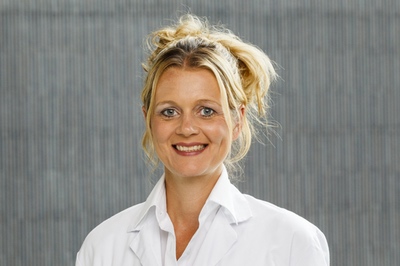 Nina Feddermann-Demont completed her studies in medicine at the Westfälische Wilhelms-Universität Münster; in addition, she holds an intermediate diploma in sports science from the German Sports University of Cologne and completed further training in manual medicine. She has been working at the Department of Neurology, Interdisciplinary Centre for Vertigo and Neurological Visual Disorders, University Hospital of Zurich since 2010. She became a specialist in neurology in 2015. Nina Feddermann is member of the scientific committee of the Concussion in Sports group and from 2013-2016 of the FIFA Medical Assessment and Research Centre (F-MARC). In 2012, she launched the collaborative project “Swiss Concussion Project” to improve the return to training and play after head injuries in football. 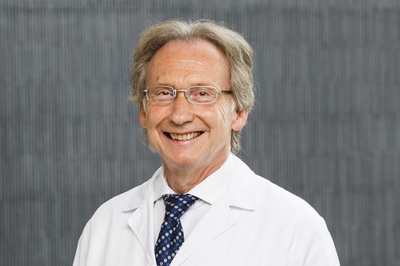 Alfred E. Müller studied medicine in Zürich. He completed the initial specialization in pathology, surgery and internal medicine, and became a specialist in neurology. He has been Head of Neurology, Schulthess Clinic since 2007. In addition, he is member of national and international neurological societies. His activities include the education and further education of physicians and students, with numerous national and international lectures and workshops, as well as book chapters and publications. He is a lecturer at the ZHAW (Zürich University of Applied Sciences), School of Health Professions, as well as at the Swiss Federal Institute of Technology (ETH) in Zürich. 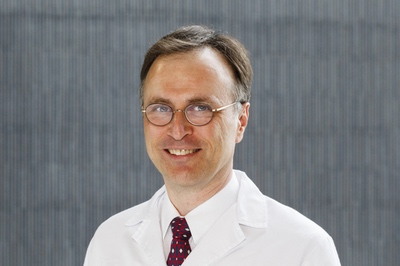 Dominik Straumann is a physician and researcher at the Department of Neurology of the University Hospital Zürich. His research focuses on the pathophysiology of eye movements and the balance system. He became an associated professor (Habilitation/venia legendi) at the University of Zürich in 2003 and was appointed Extraordinary Professor of Neurology there in 2013. Since 2004, he has been the Director of the Interdisciplinary Centre for Vertigo and Neurological Visual Disorders at the University Hospital Zürich, which he co-founded. He is a member of various national and international societies and journal editorial boards in the fields of neurology and neurosciences. He is currently the co-chair of the Scientific Panel for Neuro-Ophthalmology and Neuro-Otology of the European Academy of Neurology. 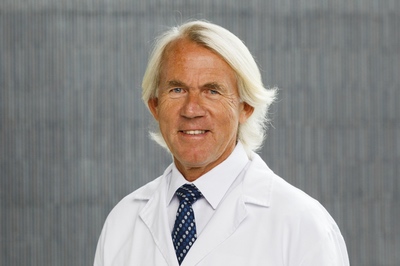 Jiří Dvořák, a Professor at the University of Zurich, Senior Consultant in Neurology at the Schulthess Clinic in Zurich. He is a Senior Editor of the British Journal of Sports Medicine and Deputy Editor of SPINE, is widely published with 425 original articles and 48 books in different languages. His current research activities are focused on the prevention of injuries and their consequences as well as on head and neck injuries. From 1994 to 2016 he was the Chief Medical Officer of FIFA and Chairman of the FIFA Medical Assessment and Research Centre (F-MARC). He currently sits on the IOC Medical and Science Committee and is a member of the WADA Health, Medicine and Science Committee. Prof Dvořák was also appointed as Senior Advisor to co-chair the NCYSS (National Council of Youth Sports Safety). 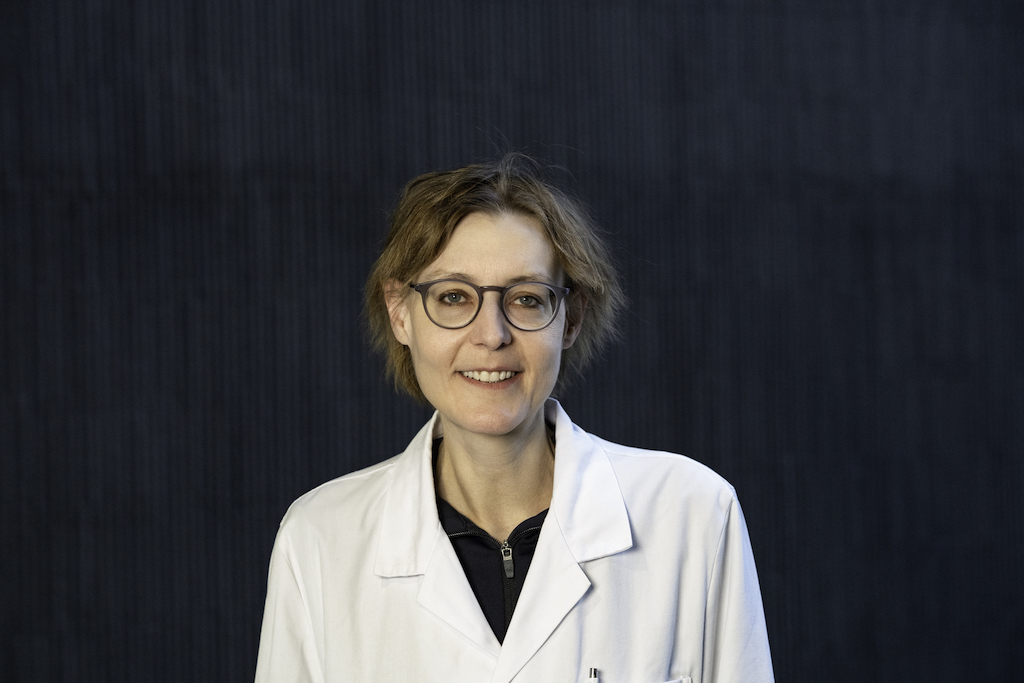 Antonella Palla was awarded  Certificates of Qualification in Neurosonology (2007), Electroencephalography (2014) and Pain (2014). In 2011 she received the Venia Legendi from the University of Zürich (for the work pathophysiology of vestibular neuropathy). Her major research interests are peripheral and central vestibular disorders and headache diseases as well as the effects of head trauma on headaches. She is Vice-President of the Swiss Headache Society and member of various national and international societies in the fields of neurology and pain. 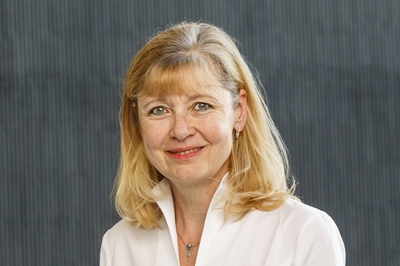 Astrid Junge has a PhD in psychology, is a licenced psychotherapist and has received the Venia Legendi in social and preventative medicine. She was appointed Professor for Prevention and Sport at the Medical School Hamburg in December 2013, where she leads the Research Area “Prevention, Health Promotion und Sport”. For 20 years, she was the Scientific Director of the FIFA Medical Assessment and Research Centre (F-MARC) and was instrumental in developing F-MARC into an internationally recognised research organization. Prior to this, she worked in the Departments of Psychosomatics and Medical Psychology/Sociology at the Universities of Hamburg and Marburg and conducted studies on quality management in two clinics. Astrid Junge has led numerous interdisciplinary studies in the field of sports medicine and has published over 120 scientific papers. 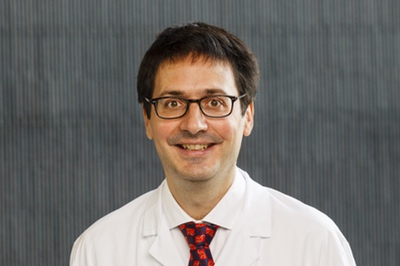 Konrad P. Weber studied medicine in Zürich from 1992 to 1998, and completed his MD in 2003, working with Prof. D. Straumann at the Department of Neurology, University Hospital Zürich. From 2006 to 2008, he worked as a Research Fellow with Prof. M. Halmagyi and Prof. I. Curthoys in Sydney, where he substantially contributed to development of the video head impulse test. He completed his training as a neurologist in 2009 at the Department of Neurology in Zürich and was awarded Certificates of Qualification in EMG, EEG, and sleep medicine. Since then, he has been spending 50% of his time working as a consultant at the Department of Neurology and 50% at the Eye Clinic, USZ, in the Interdisciplinary Centre for Vertigo and Neurological Visual Disorders. In 2014, he was awarded the venia legendi (similar to associated professorship) by the University of Zürich for his work in the specialist fields of neuro-ophthalmology and neuro-otology. 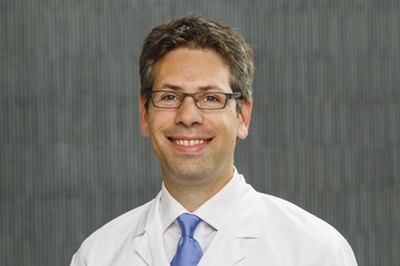 Alexander A. Tarnutzer received his medical degree 2003 from the University of Basel and his doctoral degree in 2004. He then started working as a research fellow and resident at the interdisciplinary center for vertigo and balance disorders, University Hospital Zurich. From 2009 to 2010 he was research fellow at the vestibular/eye movement testing laboratory (Prof. D. Zee) in Baltimore. In 2012 became a specialist in neurology, was awarded Certificates of Qualification in EMG, and started to work as a senior physician at the Department of Neurology, University Hospital Zurich. His major research interests are peripheral and central vestibular disorders and cerebellar diseases as well as the effects of head trauma on function and structure of the brain. For his work on perception of gravity he received 2014 the Venia Legendi from the University of Zurich. 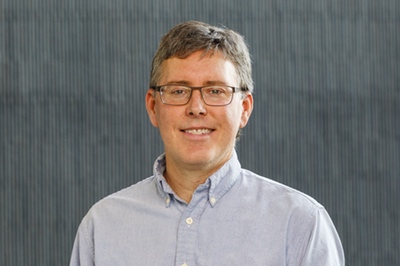 Christopher J. Bockisch was awarded his PhD in psychology by the University of Pennsylvania in 1996. His research focused on the field of visual perception in humans. Christopher Bockisch then received funding for postdoctoral research at the Smith-Kettlewell Eye Research Institute in San Francisco where he focused his research on the oculomotor system. He then moved to Zürich to the Department of Neurology and dedicated himself to questions relating to the pathophysiology of the balance system. In 2004, Christopher Bockisch was appointed as a Senior lecturer at the Interdisciplinary Centre for Vertigo and Neurological Visual Disorders. He was awarded the Venia Legendi for the topic oculomotor neural integrator. 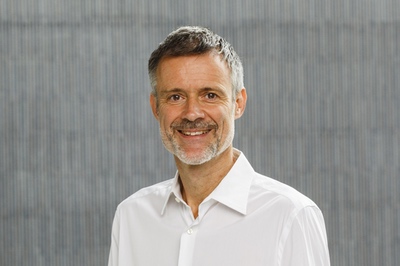 Urs Scheifele is a physicist ETH, and has been working as a scientific associate and medical technical assistant at the Interdisciplinary Centre for Vertigo and Neurological Visual Disorders of the University Hospital Zürich since 2001. In addition to the video-oculo-graphy, he has developed the subjective visual vertical balance test and a program for the analysis of fundoscopy. He is responsible for the technical support and the further development of the devices for the diagnostic of vertigo. 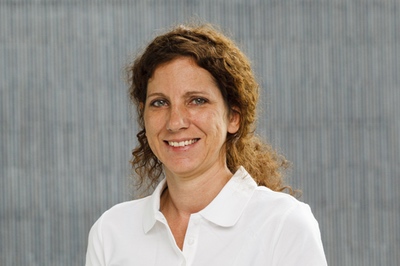 Cornelia Meier graduated from the School of Physiotherapy at the University Hospital of Zurich (USZ) in 2000. She then worked in the area of neurorehabilitation in the Zürcher Höhenklinik Wald and moved to the USZ in 2001. Since then, she has completed further training courses in the specialist areas of neurorehabilitation and vestibular rehabilitation. As of 2005, Cornelia Meier became a member of the vestibular specialist group in the USZ and lecturer on the course for physiotherapy for dizziness and balance disorders. From 2009 onwards, she took over the lead of the specialist group. She worked in the Interdisciplinary Center for Dizziness and Neurological Visual Disorders at the USZ, where she introduced a gait analysis for balance assessments. She completed the advanced training in scientific work at the Zurich University of Applied Sciences (ZHAW) in 2012. Since 2015, she has been working as a physiotherapist at the Swiss Concussion Center with a focus on vestibulo-oculomotor rehabilitation.

Stefan Schönenberg graduated from the School of Physiotherapy in Schinznach in 1996 and subsequently worked at the Lindberg Clinic in Winterthur. From 2003 to 2018 he worked as physiotherapist for the association Swissvolley. Since 2004 he has been working as a sports physiotherapist at the Schulthess Clinic Zurich. As a member of the Swiss Olympic Medical Team he took care of athletes during the Olympic Games 2004, 2008, 2012 and 2016. He was part of the Medical Team for the Beach Volleyball Major Series 2010-2016 as well as for the preparation of the Swiss Ice Hockey Team for the World Championship 2017.

Stefan Schönenberg took part in numerous training courses on Triggerpoint, Muscle balance, Gamt A & B series, Visceral Osteopathy, Kineseotaping, Manual Concept (Perth, Australia) and Headache Concept after Dean Watson (Perth, Sydney and Valencia). Since 2018 he has worked as an expert on cervical spine, cervicogenic headache and dizziness at SCC. 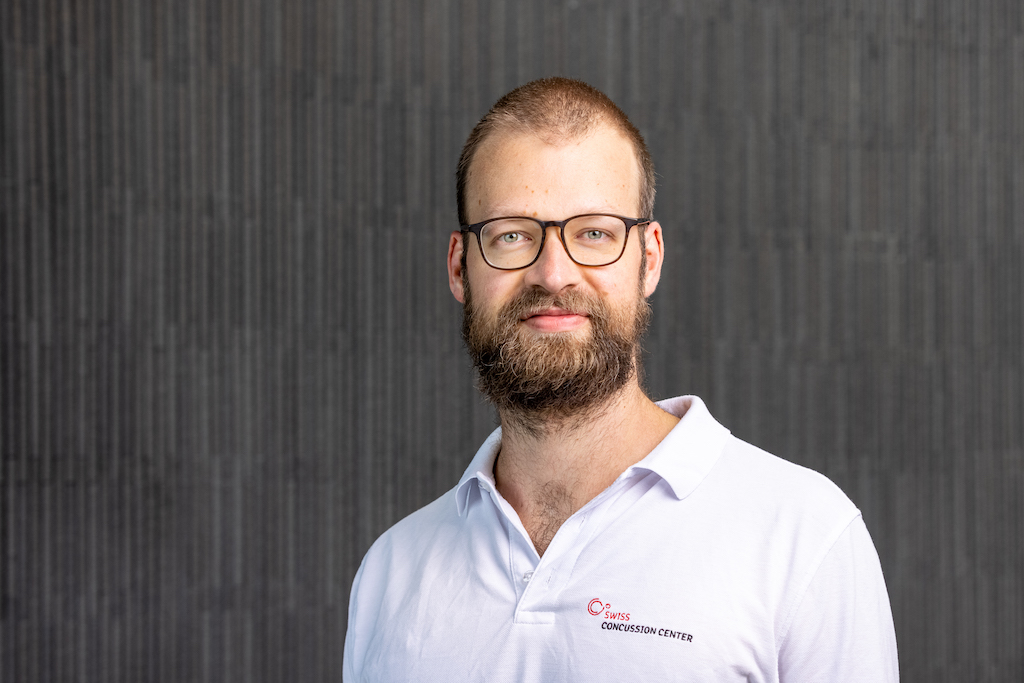 Ferdinand Hardinghaus completed his bachelor degree in physiotherapy in Osnabrück, Germany and has worked in a sports medicine practice in Zurich since 2016. In 2019, he began working as a physiotherapist for the Ballet of the Opera House in Zurich.

Since March 2021, he has been working at the SCC as a physiotherapist with a focus on “Vestibulo-Oculomotor”. 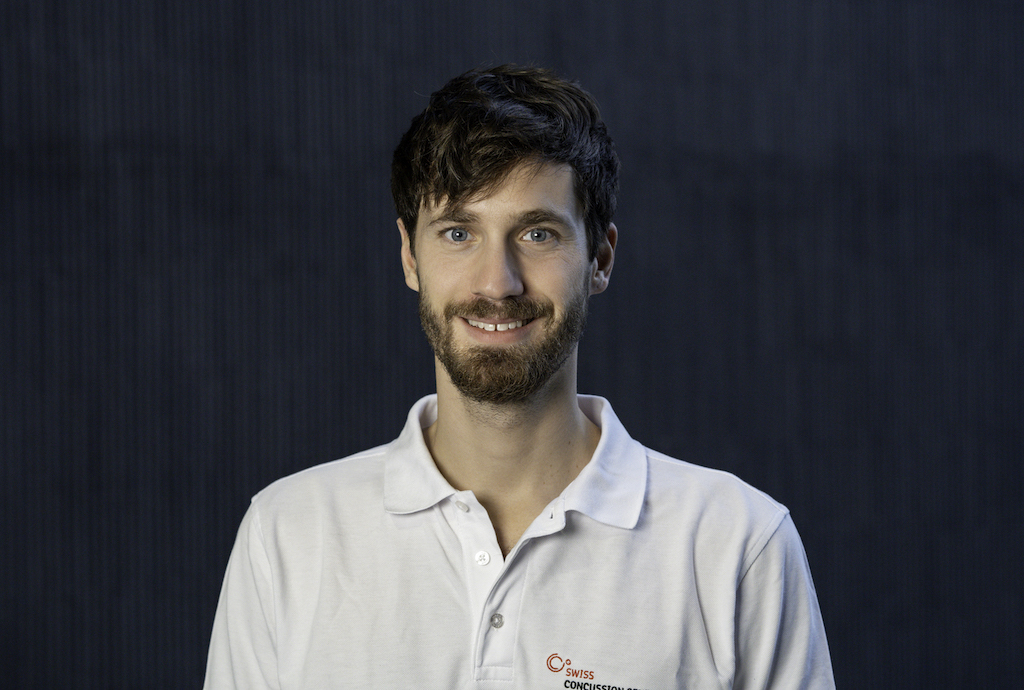 Luca Grossklaus acquired his Bsc in Physiotherapy in 2013 at the University of Applied Sciences in Basel. Thereafter he worked in the field of sports rehabilitation, first at the Rennbahnklinik in Muttenz and then at the elite sports center OYM in Cham. Since 2015 he cared for the athletes of the swiss judo federation at numerous international training camps and championships.

He started working at the Swiss Concussion Center in 2021 with the main emphasis in sports. 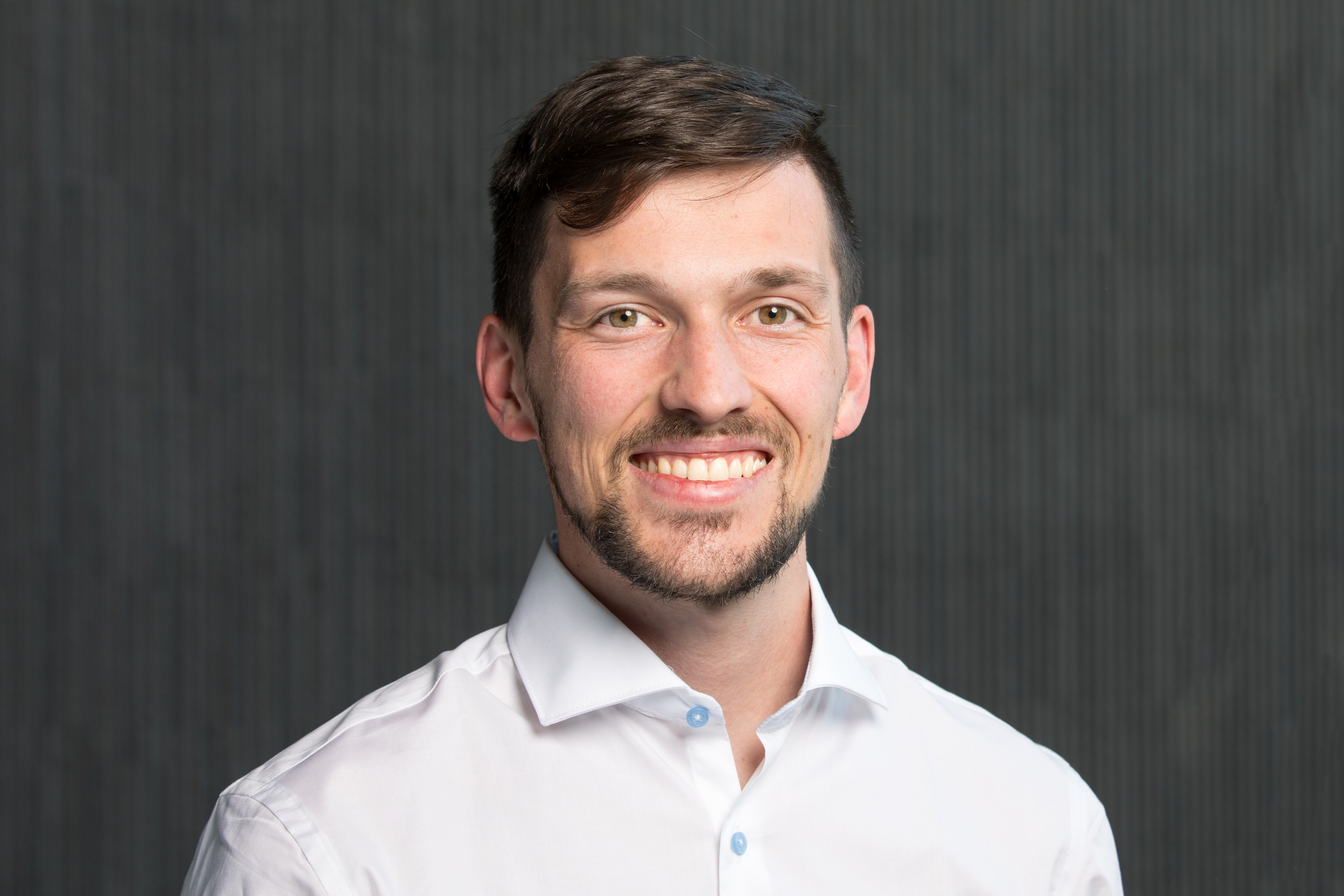 Daniel Agostino native from Luxembourg obtained his Bachelor in Sport Science at the University of Geneva and Master degree at the University of Lausanne. His main research domain consisted of evaluating the effect of hypnotic suggestion on neuromuscular properties by using transcranial and neurostimulation. He gained experience in performance diagnostics throughout several internships in clinical and research departments in Luxembourg and Switzerland. 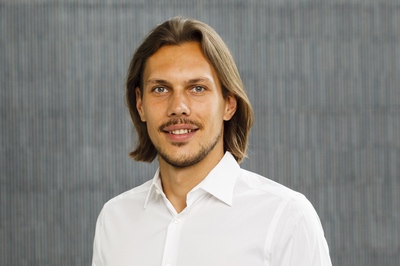 Dzmitry Katsiuba studied psychology in Berlin. He has been enrolled in commercial information technology at the University of Zürich since 2014. His area of responsibility at the Swiss Concussion Center covers evaluation and data analysis. Dzmitry Katsiuba is fluent in Russian and also acts as a test administrator.

Michaela Fröhli joined the Swiss Concussion Center in September 2021, previously working as a medical secretary at Stadtspital Triemli. In 2021, she completed advanced education to become a chief resident and executive assistant. 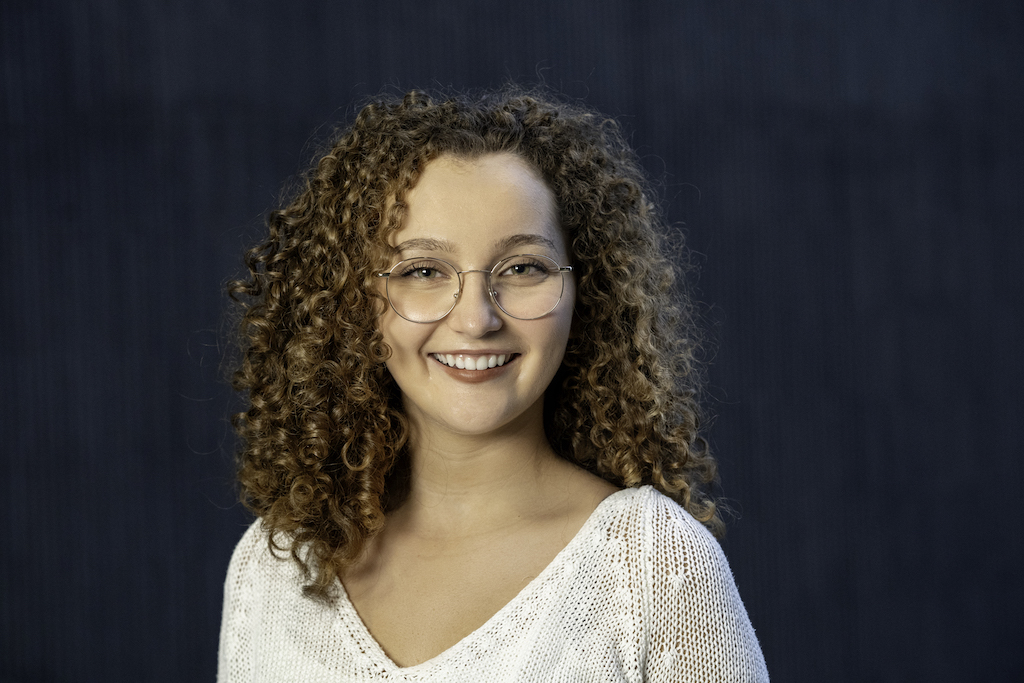 I am a trained dental nurse, after my education I completed further training as a medical-/hospital secretary and was employed as a dental secretary in Zurich 2017 – 2021. Since October 2021 I work as a medical secretary at the Swiss Concussion Center. 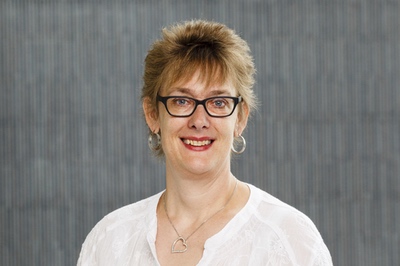 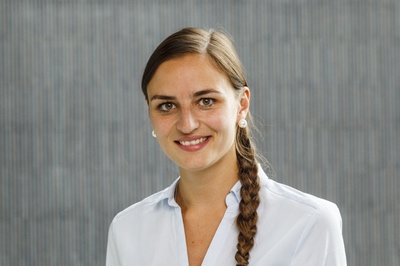 Andrea Weiss is a practice assistant and has worked in neurology at the Schulthess Clinic from 2012 to 2015. In 2012, she qualified as a senior consultant personal assistant.